I love Jackie Chan, he is my number one childhood hero and I am going to tell you why.

“I love you too!”I have been a massive Jackie Chan fan since I was 8 years old, when he was only known outside of Hong Kong thanks to the now almost redundant video rental stores that stocked his movies in the ‘martial arts’ section, where there was always an abundance of Jackie Chan movies that were mostly so good, that to a 8 year old, they elicit repeated rental. I knew and loved Jackie Chan way before he became famous in the west for his Hollywood movies, which really kicked off in the mid 90s thanks to Rumble in the Bronx.But it’s not just because of his movies that I love Jackie Chan, but because of his journey in life and who he became after starting out in a very menial life as the son of civil war refugees that earned their keep as cleaners for the French Ambassador in Hong Kong. He came from nothing with all the odds against him, he dreamed big, worked hard and became a ridiculously massive success and inspiration to people all over the world. His movies transcended cultures and earned him fans from every corner of the globe, the true mark of how spirit can bond people.You can read Jackie’s fantastic biography; I am Jackie Chan, My Life in Action. 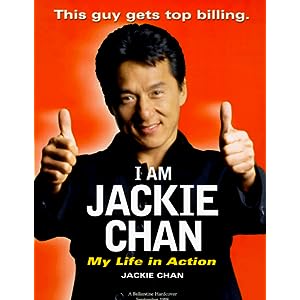 Available online, get it on Amazon.I highly recommend you buy this, it’s incredibly inspiring and will give you an insight to a truly incredible man, a true underdog hero with a massive heart. If Naruto was real, he’d be Jackie Chan. Get it here from Amazon in the UK – http://www.amazon.co.uk/Jackie-Chan-My-Life-Action/dp/0345415035Like I said, my first experience of Jackie Chan was when I was 8 years old, when I first moved to NW London, one of the responsible adults in my household rented out a movie to keep me placated during time off school. That movie was called “The Armour of God”.

The original cover I remember from my childhood.The Armour of God was like Indiana Jones with Kung Fu, mostly set in Europe with Jackie Chan as an international treasure hunter; Asian Hawk. To cut a long story short, Jackie has to rescue his cousin’s girlfriend from an evil cult and acquire “the armour of God” that they have, a set of armour and weapons from a medieval war that were on the collection list for an antiques dealer who bankrolls Jackie’s mission. Jackie has to end up fighting the entire evil cult single handedly, despite being totally outnumbered, his ingenious resourcefulness and ‘never give up’ attitude gets him by. By this point, I was in love with Jackie Chan, and then he said something in the movie that would change my life.Towards the end of the film, Jackie Chan becomes a little bitter and starts venting about the hardships in his life. He then said this to his on-screen cousin –“When I was a kid, I dreamt of being a hero, saving people, doing good deeds…”Those words went straight to my naive 8 year old heart, and in that moment I decided “that’s what I want to do”. I might not be an international treasure hunter with insane Kung Fu skills, going around the world, beating up evil cults. But I can’t help but think that I still believe in those words, that like Jackie, I learnt that one’s desire for strength is only so that we can protect and help others weaker than us. Schmaltzy as that sounds, I would learn just how pertinent those words were when I learnt about Jackie’s early life of modest means, hard work and having a dream. At the very least, his attitude towards a challenge is something I have most definitely embraced.Jackie was sold into a Chinese Opera Academy at age 7 for a contract that lasted 10 years, in the hope that he would learn some skills and eventually have a trade in performing when he left at 17. It was 10 years of the kind of training and treatment that today would be unequivocally construed as abuse. He left the academy at 17. Poor and considering himself not good looking thanks to a fight that left him with a big broken nose (just like me), Jackie lived the life of a a stuntman in Hong Kong, earning a pittance for risking his life with no insurance or health & safety regulations on the set of various movies. He earned just enough to survive with no opportunity for anything big on the horizon. He also met his first girlfriend at 17, a beautiful young girl who came from a wealthy family and was a singer. When her father found out that she was dating Jackie; a poor, ugly stuntman with no realistic future, he forbade her from seeing him again. Jackie ran away, crying that he would never be good enough for any girl. Money and looks were areas he had no leverage in. After about a decade of hardship after leaving the academy, Jackie met up with his academy brothers; Yuen Biao and former academy bully; Samo Hung and dreamed of making their own movies. Shortly after, Jackie Chan became the biggest sensation in the asian movie market with all the wealth, opportunity and fans he could imagine.For those of us who have been Jackie Chan fans before his Hollywood years, will know that Jackie’s journey to stardom has been well earned, he pioneered cutting-edge fight choreography with his trademark underdog personality that endeared him to others who felt they too were outcast. Unlike the invincibility of Bruce Lee, Jackie was vulnerable and scared, but showed courage and ingenuity that inspired many of us, that perhaps we too could be as awesome as him.Jackie is now not just a movie star, but a global brand. His work is not just on screen, but extends to enormous amounts of charity. If you’ve never seen a Jackie Chan movie, here’s a snippet of his top ten fight scenes.Some of you may have seen me on the Children in Need charity edition of Mastermind, where my chosen subject was Jackie Chan. I hope I did him proud. bbc.co.uk/iplayer/episode/b0175nwk/BBC_Children_in_Need_2011_Mastermind_Special/
Finally, to show you the extent of my Jackie Chan love, this is the kind of stuff I got up to in my teenage years –