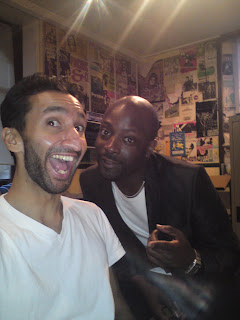 Backstage at Hemel Hempstead before the show.Hello my loyal followers!I’m currently on tour with my fantabulous support act Jason Patterson (@jpattersoncomic), and the touring lifestyle is proving to be a lot of fun and a challenge with all the travelling required. We often drive into a new town or city a few hours before a show, get ready, perform, meet the fans after the show and then drive back to London (when we’re not staying over when further afield). It’s like this, day in, day out, and the days all blur together and the sense of time seems to blur along with it all.We’re having a great time, the turnouts have been great, a few venues have sold out, and some have had enormous walk ups too. We’re not even half way through yet and it already feels like I’ve been away for months! On the couple of days that we’re not on tour, I am often back in London having meetings and writing for the next solo show which will be announced soon, so stay tuned.I get all suited and booted for my shows, which the girls seem to adore 😉 and all the venues have been so much fun to play. It’s such a thrill to be on tour, it’s so different to playing a comedy club and being part of a bill, where it’s all about the team work and sometimes having to win over tough crowds. Many fans have asked me for merchandise, of which there is none for this tour. But rest assured, the Imran Yusuf paraphernalia is on the way with a DVD coming to you one day soon!Things are really taking off, there are lots of exciting things to reveal very soon as I continue to ascend in the comedy world towards my dream of creating something really special. I’ll endeavour to update this blog more often now, with updates from the tour when we’re on the road. For now, stay tuned to my Facebook Fan Page and follow me on Twitter (@imranyusuf) for the latest updates.Okay, bedtime now, I have loads of meetings tomorrow and then dinner with some old friends from the video games industry. Sweet dreams! 🙂