Just before I turned 15 years old, a beat em’ up was developed by Nintendo’s favourite second-party developer; Rareware called Killer Instinct, it was awesome beyond words in a time when the genre was truly dominated by Street Fighter II. For my 15th birthday I went to the arcade in London’s Trocadero centre, I got my hands on Killer Instinct, it was amazing, unlike anything I had seen before and I wanted it now, right now and I wanted to be Jago.

Killer Instinct is one of the few beat em’ ups developed in the western hemisphere, a genre really the expertise of the Japanese who had given us almost everything and anything to do with animated one on one violence with martial artists and other pummelling pugilists. KI was a breath of fresh air, a heavily stylised game that pioneered cutting edge pre-rendered sprites to give an illusion of 3D on 2D hardware, a truly savage combo system that satisfied your investment in the game with spectacular displays of an orchestrated combat unseen anywhere else in any other game. With the Nintendo 64 being delayed, Nintendo released Killer Instinct in a scaled down form on the Super Nintendo, and despite the step back in hardware, the game was still great and felt just like the arcade version. I loved it even more now that I had it in my house on my home console, I would write out my own player’s guide on MS Word at home and then take it into school and print it off for my friends. I wanted them to enjoy the game as much as I did by knowing how to get the most out of it all with the intricate combo system. Even though I could play it at home, I loved the arcade version and vowed that one day I would own the very arcade machine when I was older.

By the time I was 22, I owned the arcade machine. My first job in the games industry was at Midway Games (responsible for Mortal Kombat) who had previously been in league with Nintendo by providing them with arcade hardware to publish Killer Instinct on. I managed to source a cabinet in San Diego, had the guts ripped out and rebuilt into a bespoke home console of the original arcade game, complete with the attract mode’s booming voice “Coming to your homes in 1995, only on Nintendo Ultra 64!”.

I owned a piece of my youth as I had vowed only 7 years earlier, I felt like a champion and was the envy of all my friends (okay about 3 of them).

Fast forward almost 17 years later, after probable difficult legal issues with Nintendo and an actual copyright issue with an American TV show with the same name, a reboot of Killer Instinct is being created by Double Helix Games for the upcoming Xbox One. And as a loyal fan of the original whose difficult-to-please attitude casts a critical eye on this attempt to give one of my most favourite games a rebirth, I am glad to say that I am massively excited about it.

It looks amazing, it moves with a smoothness that almost appears too good to be true and that combat looks truly savage in a way that we enjoy animated violence in the safe constraints of a fantasy world that exists in a video game and is not real. Just look at this and tell me that it isn’t liquid sex injected into your eyeballs.

As you can see here, I was lucky enough to be invited to a private showing of the Xbox One and got my hands on Killer Instinct. To say I was happy would be an understatement. 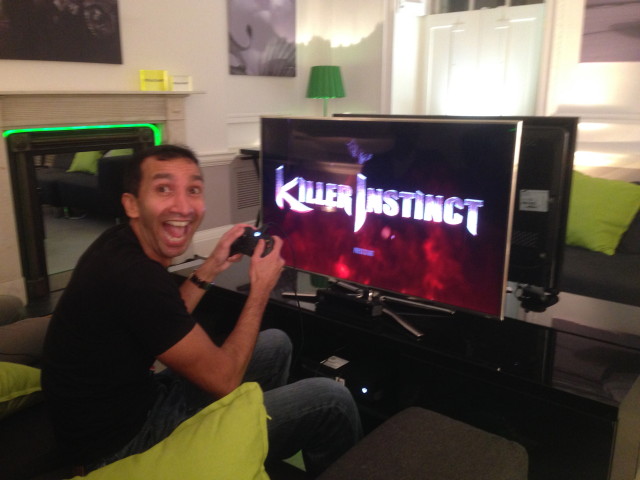 Sometimes, reboots, sequels or any attempt to reinvigorate or better an original masterpiece often goes wrong in the pursuit of making money in the games business, especially when such a task is farmed out to a third party who had nothing to do with the original game. However, Double Helix have pulled off an amazing job. Not only have they created a finally tuned beat em’ up, they have remained true to the integrity of Killer Instinct and brought it not screaming but roaring with Jago’s Tiger Spirit into the 21st century with the highest standards across the board. The graphics, the sound, the gameplay is solid, proper solid, there is no fat here, just pure finely defined muscle. 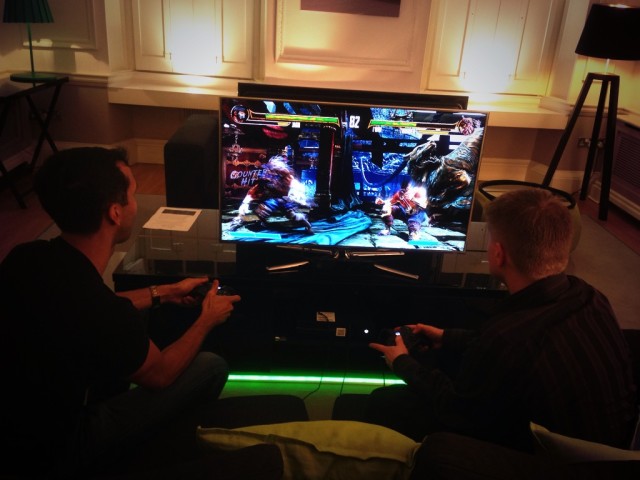 In the couple of hours that I got to spend with Killer Instinct, I can safely say that it “feels” like Killer Instinct, the characters have many of their original moves, the combo system is fluid that I was able to pull off some tasty combos by using the logic from the original game. On top of this, there are new features to the combat, the customary rage gauge for all modern beat em’ ups is in there too, adding the opportunity to unleash another dimension of carnage in the midst of combat. I played a limited demo with only Jago, Chief Thunder, Sabrewulf and Glacius available, and there was no information available on the combat system, so I was fortunate that I knew a lot about the original game in order to get something out of this opportunity to taste it before launch. It was a little tricky to play it on the controller, but hopefully the official MadKatz joystick that is coming out for it will make things easier, however I’d prefer a Super Nintendo controller (wink).

Apparently, Killer Instinct will be available on launch as a FREE download with only 4 playable characters, everything else can be unlocked for a reasonable price, for what is a throughly developed game that deserves every penny. I see this as a strategic move on Microsoft’s part, the beat em’ market is too competitive, dominated by Street Fighter, Tekken, and Virtua Fighter which comprise the staple diet of the beat em’ up purist. By offering Killer Instinct for free at launch, Microsoft and Double Helix can easily nurture a new fan base from those unfamiliar with this IP, which hardcore fans of the original like me will encourage by evangelising its incredible gameplay and inviting all who prefer their violence virtual where the only damage is having your ego bruised when you’re on the receiving end of an Ultra Combo.