I’ve just got back to my flat from a late night double deep fried Mars bar experience to find my flatmate and American comic; Chris Coxen with two black eyes after being attacked by a gang of 5-7 feral cunts. 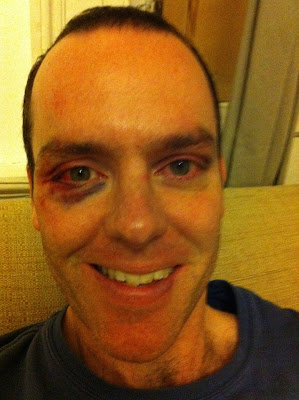 I’ve also found out that comedian Mark Simmons has also been the victim of an attack, in which his money and phone were stolen, however his assailants were caught shortly after by the Police. In the four full festivals I have done, I have never heard of such violence, although a few years ago I once saw a violent drunkard get battered by security in Bristo Square after he punched fellow comic Paul McCaffrey for no reason.Here we are at the Edinburgh Festival Fringe, the biggest and oldest arts festival in the world, where artists, performers, musicians, comedians etc come to from all over the planet to share and celebrate their wares with audiences and industry. This event is an amazing example of human artistry and beauty, it is something that enriches our lives and embraces our divine virtues, this event is a time of joy. However, due to the wanton procreation and perpetuation of feral humanoids whose only manifesto is to destroy, this festival has been blighted for at least a couple of people whose enjoyment and efforts has been ruined by the predatory behaviour of a bunch of animals.I’m sharing a flat with Chris, one of the nicest guys I’ve ever met, a true hard working gentlemen who came to the UK to pursue his dream to showcase his talents as a character comedian. This is his first full run at the Edinburgh Festival, he’s put incredible effort, financial investment and made personal sacrifices to get here all the way from his home in Boston, Massachusetts, USA. And now his festival experience has been blighted by such an act of unwarranted violence. If you’re in Edinburgh, it’d cheer him up if you check out his show; Chris Coxen’s Space Clone Audition, Cabaret Voltaire @ 2:30pm. However, with his eye swollen up, he might not be around performing tomorrow.If you’re at the Edinburgh Festival, please beware during the late nights and be ready should any shithead try to attack you. Sometimes you have to fight fire with fire, and the good guys will prevail…Peace x