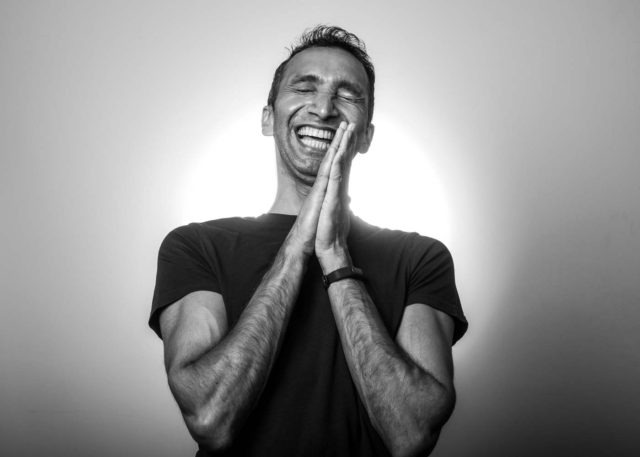 Renowned as a skilful raconteur who can seamlessly weave socio-political satire with heartfelt introspection into his charming and endearing trademark style, Imran Yusuf is a languid, punchy, cheeky and utterly lovable comedian, who has been a pioneering voice in the world of modern British comedy and across the world, racking up over 7 million hits on YouTube!

Imran is of East-African Indian descent, born in Mombasa, Kenya but raised in London with a brief stint studying illegally in the USA. He has travelled much of the world including Israel/Palestine and Saudi Arabia during the Lebanon Crisis in 2006 in an all-encompassing pilgrimage for which he quit his job and spent his savings. What he gleaned would change him forever and influence him to become who he is today.

In 2010, Imran presented his debut solo show at the Edinburgh Festival. “An Audience with Imran Yusuf”, was part of the Laughing Horse Free Festival and it was Imran’s intention to develop his craft and material at the Fringe whilst at the same time keeping under the radar of the UK comedy industry and Press. However, word about the show got out and within a week Imran had gained his first 5 star review, which led to the coveted nomination for Best Newcomer in the Foster’s Edinburgh Comedy Award 2010 (He was the first performer from The Free Festival to be nominated in the history of the Awards). All of this whilst fasting between sunrise and sunset in observation of Ramadan.

Imran’s TV debut was also made shortly after the festival appearing on Michael McIntyre’s Comedy Roadshow (BBC1) and the Edinburgh Comedy Fest (BBC3) broadcast in September 2010, followed by his own pilot; The Imran Yusuf Show (BBC3) in 2012.

Dedicated to his craft, Imran continues to write and perform all his own material. Creating 5 solo shows; “An Audience with Imran Yusuf” (2010), “Bring The Thunder” (2011), “Roar of The Underdog” (2014), “Super Roar of The Underdog Turbo X: HD Remix” (2015) and “Saint, Sinner, Sufi” (2018). In 2019, Imran teamed-up with Orthodox Jewish comedian Ashley Blaker for their joint show “Prophet Sharing” in a UK tour with three successful sold-out shows at London’s prestigious Jewish cultural centre; JW3 and at academic faith forum; The Woolf Institute in Cambridge. When not writing and performing stand up comedy, Imran also acts in various tv and film projects like “Fried” (BBC3), “Ultimate Brain” (CBBC) and “Gormint” (Amazon Prime Video).

In his previous career, Imran worked in the video games industry for Midway Games, Argonaut, Eidos, SEGA Europe, Kuju London and Performance Designed Products. Still as passionate about video games as he was in his childhood, Imran continues to work with the games industry and since 2013 has been a patron of video games industry charity GamesAid, hosting the annual fundraiser Stand Up for GamesAid comedy show. Imran also supports Medical Aid for Palestinians, War on Want, Amnesty International, Médecins Sans Frontières, NSPCC and DAWN Charitable Trust, amongst others.

Currently, Imran’s BBC Radio 4 pilot “Imran Yusuf: Relabelled” is available along with him playing video games on his Twitch channel.